Animals and their fibres

Angora Goats give you Mohair

Depending on the breed or species of animal, fibres form either a sinusidal crimp or helical coil. For example , Merino sheep and Huacaya alpacas produce fibres with a sinusidal crimp whereas the hair fibres of  Angora goats and Suri alpacas coil. The difference appears to be related to the arrangement of cortical proteins within the fibre.

We farm Angora Goats. Our herd founded in 1980 came from the feral / wild goats that range freely in Australia. These goats are a mixture of meat and milking goats which were a part of life in rural towns in the early settlement days and then were left to run free. Somewhere along the way Cashmere goats also entered the mix ensuring that most of the feral goats then and now also had a genetic disposition to producing some cashmere. These goats where used for foundation stock in recent times for many angora and cashmere herds in Australia. Perhaps it is partially because of the feral / cashmere background of our herd that we have a very soft mohair yarn.

Breeders of cashmere goats concentrate on growing more secondary fibres (cashmere) and allow the guard hair to grow as it likes. They then either comb the cashmere from the guard hair at harvest time or if the fibre is shorn off the goat it is then dehaired to get the cashmere. The thickness of the cashmere fibres is generally in the range 14 -18 micron.

Breeders of angora goats endeavour to reduce or remove completely the guard hair by selectively breeding with animals known to produce those results and then grow more mohair from the secondary follicles. The thickness of this mohair can then vary between 20 and 40 microns. It depends on the breeder and what markets he/she is supplying. As with wool, the finer fibres are used in clothing and the coarser fibres are destined for the carpet / upholstery trade. Generally the coarser fibre producing animals will produce a greater quantity of fibre.

It is accepted that it will take approximately five generations of breeding using purebred sires to achieve a purebred angora goat.  A generation can be less than two years but for us we allow at least three years

We have chosen to produce as fine a mohair as we can and realise the true value of that fibre by processing it into goods ready to wear or knit.

References to Angora goats date back to 1000s of years BC. In recent times (the last few hundred years) Angora goats were bred mainly in Turkey. It is from there that they were exported to places around the world mainly South Africa, the USA and Australia. Since we have been breeding Angora goats, Australia has imported animals from both South Africa and the USA. This has given us the opportunity to access the best genes available.

Our kids (baby angoras) generally are planned to arrive in our late spring time which is October.

When it comes to shearing it is common practice amongst angora breeders to shear every 6 months. Mohair will grow at approximately one inch per month so at six months a goat normally has a fleece six inches long. This is the length that is most acceptable in the raw mohair market as it suits most standardised processing equipment. At Wagtail we are able to set our machines to process longer fibres so that we are able to extend the times between shearing to every eight months approximately. The real benefit of this is that it allows us to spin yarns with longer fibres. The use of longer fibres coupled together with the combing process which can remove most short fibres of a preset length creates a yarn that has less tendency to shed or lose it's mohair.

Worms are the goats biggest health problem. They appear to have little resistance to parasitic intestinal worms, especially the kids and weaners. This is where we use 99% of the chemicals on the farm. Intervals between drenching can vary from four weeks to six months depending on the prevailing seasonal conditions. At times we have used organic drenches (garlic, copper, mineral pellets) with varying degrees of success.  In times of minimal worm infestations they provide an acceptable alternative.

When it comes to fly strike and mulesing, goats are more fortunate than sheep as they are rarely bothered with flies. This is partly because

At Wagtail Yarns we do not mules our goats, however as we improve the fleece quality and quantity of fibre on the goats we do have to remain vigilant for any random occurrences.  Outbreaks are treated by removing fleece from the area and then spraying to destroy any remaining flies, maggots and eggs. 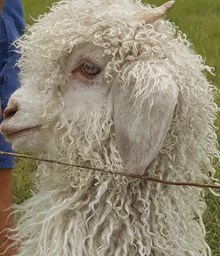 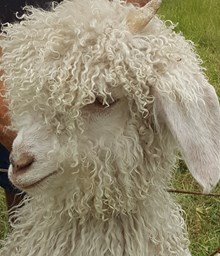 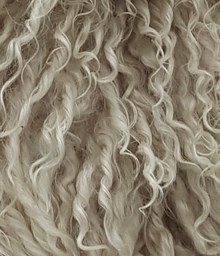